I Wanted To Move… But I Was “Too Tired” (Short Story)

Portfolio Management Lecture, May 2013 — As the class shuffled out the room, I was grateful for the 15-minute respite in-between four hours of lecture. I stayed behind, desperate for some sleep.

I had been spending the past three days on my paper. Save for a couple of power naps (to sustain my dwindling mental acuity) – that was sixty hours without proper sleep. 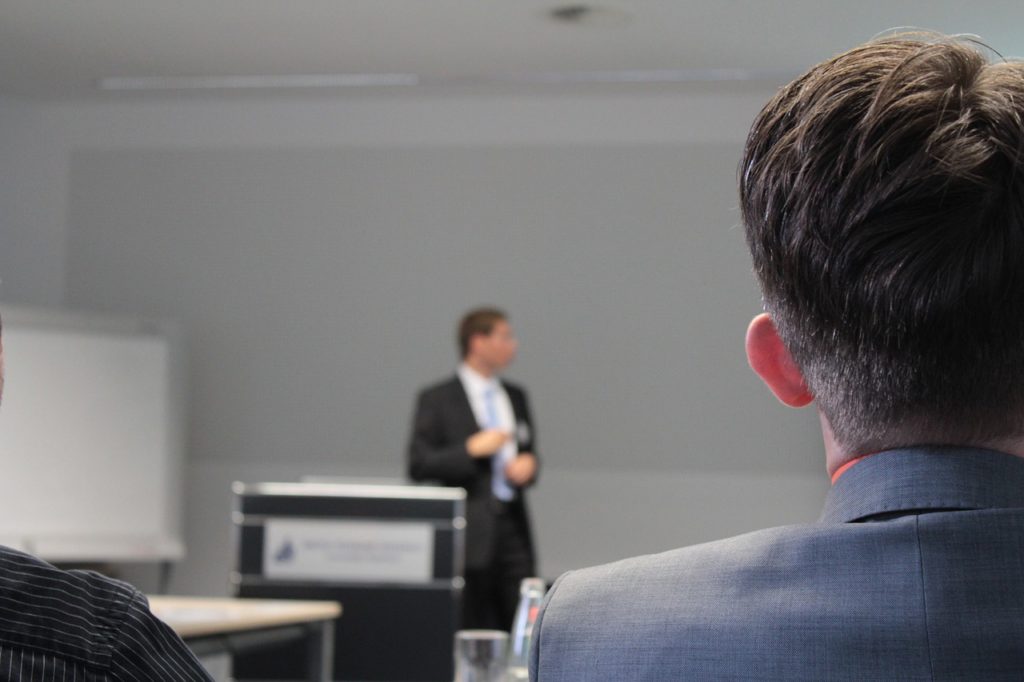 Hearing the soft music put on by the lecturer, the fatigue pulsated through my head, not unlike standing atop a spinning carousel whirling at twice the speed. So, it was no surprise when everything went dark the moment my head hit the table. Even then, the whirling dizziness ensued, building up the feelings of nausea.

Should I get up? No. I wanted to move my body into a better position… but I was too tired.

The whirling settled soon after.

Back early from their break…

Some idiots must be back from their restroom break… Keep it down!

I wanted to get up to tell them off. I wanted to move… but I was too tired. 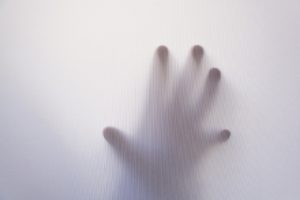 A minute barely passes, I was still conscious of the happenings in my surroundings. The same song was still playing amidst the background noises.

Then, there came a familiar discomfort against my back. Someone was relentlessly pressing their knuckle against my back, deliberately wedging the muscles apart.

Shit. It can’t be happening now…

Trepidation surged through my veins and almost immediately I was overcome by an even heavier sense of grogginess. It made me forget the wherefores of that primal fear.

I wanted to get up… I really wanted to move but I was too tired. 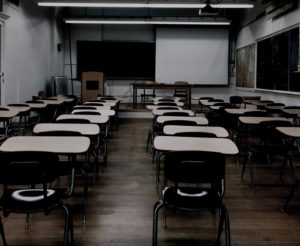 Wait a minute, why is the same song still playing in the background? That’s definitely less than 5 minutes. How can the lecture break be over?

Strangely, the room seemed to be full of people. I could hear them despite my head still being down. I certainly didn’t hear the usual ruckus from everyone re-entering the lecture room, save for the few from earlier.

What the hell is happening?

Was my sense of time warped from being excessively exhausted? It felt like the time I got drunk and blacked out.

Shrugging off the bizarreness, I got ready to shift myself upright. I could not move.

I tried again. My arms and legs did not respond. I couldn’t get up. My head was still on the table; eyes still shut.

I wanted to move but I was not only too tired. My body didn’t respond. Alarmed, I tried calling out for help.

Finally realizing what was happening… 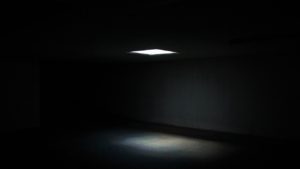 Raw trepidation struck me again. I had remembered what the sudden grogginess had made me forget earlier… Sleep paralysis.

I had been under the effects of sleep paralysis from the beginning. I had neither a voice to call out nor could I move.

Normally, I’d shake myself awake violently. Yet, I was in class. There was no way I was going to risk looking as if I was having a seizure.

This is normal, Logen. Happens all the time when you’re sleep deprived.

The pounding in my ears betrayed this feeble attempt at reassuring myself. 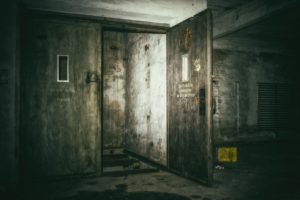 “You sure this is normal?”, my thoughts were interrupted by my lecturer.

I still could not move.

At that moment, the soft music was no longer playing. The room felt chilly. Background noise that was characteristic of a lecture room was absent… Absolute silence. Everyone was gone.

No… no… It’s happening again.

That thing that replied to my thoughts wasn’t my lecturer.

The voice spoke again, transitioning to a hoarse whisper that made the hairs on the back of my neck stand, dropping its pretence, “I said, are you sure, sleep pa-ra-ly-sis, in the middle of class, is normal…”. 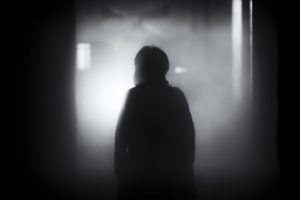 Heavy breathing from that surge of primal fear.

Stop it! Wake the hell up…

Whatever that thing was, it began cackling, knowing that I was in too deep to rouse myself awake.

I could hear its amusement as it regurgitated my thoughts from earlier in its sickening hoarse whisper. It was taunting me. It would have been easier to wake up from the paralysis earlier.

“Noisy idiots…” the whisper went on, “you ignored them.”.

Although my eyes were closed and head down, I could still hear it shifting closer to me. By now I was close to hyperventilating.

No! Stop! Go away. Get the fuck away from me!

Silence. And then more silence.

Time ticked by. There was nothing I could do but to wait it out.

Did the hallucination cease? 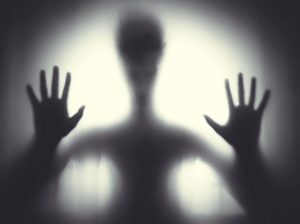 Chills went down my spine when I felt its musty breath at the back of my neck. “Helloooo…”, the whisper dragged on deliberately.

Seizure be damned! I began to shake myself awake. The grogginess grew in heaviness with every attempt. But, I needed to wake up.

Again… the sharp grinding of its knuckle against my back. I need to wake up!

Wham! The table shifted as I jolted awake.

Everything was normal. The few who had stayed in the lecture room during the break hadn’t noticed my predicament. The same song was still playing in the background.

Getting into Bed that same Night

I laid down in bed that night, slightly worried about getting another hallucination-filled sleep paralysis. But, soon, I shut my eyes. Sixty hours without proper sleep does that to you. 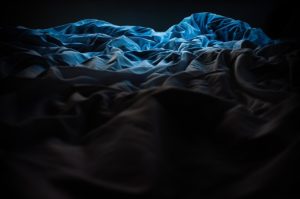 Something tickled the fingers on my arm that was dangling over the bed frame.

From the gap beneath the covers, I saw a shadowy silhouette bending over and grinning at me. I wanted to move but… I was too tired.

Note About My Sleep Paralysis Hallucinations

This short story first appeared in Way Of Ninja as a prelude to a topic on fitness and sleep. I never got round to writing more. It may never be continued because I can no longer remember the episodes.

The short story depicts the time when I got sleep paralysis and hallucination in the middle of class while in university.

I have always gotten sleep paralysis whenever sleep-deprived and stressed since the age of fifteen. It got really bad when I was sixteen before subsiding a little. Thereafter, I’ve gotten it occasionally, especially on days I sleep for less than four hours.

Discovery and some control

One army mate, who slept on the bed next to me, was the first to wake me up from an episode. He had the knack of waking me up at the onset of an episode. He had noticed the drastic change in my breathing patterns from slow to rapid heaving.

It was also through his discovery that I learnt to speak through the paralysis episode. My words would be heavily slurred though. But, it managed to alarm another sleeping army mate enough to wake me up in turn, while we were sharing rooms during a short vacation.

2013 was an especially depressing year for me. The combination of sleep deprivation, depressive thoughts, and stress meant I was getting at least one sleep paralysis episode daily. My state of my mind was completely affected.

Not one to be superstitious, I never believed that my sleep paralysis had any supernatural basis. However, it was nonetheless terrifying.

Close to the time of this short story, I was getting paralysis hallucinations every night (or even during the day) for a week. Each night, the episode would continue from where the previous night’s episode ended.

This was due to papers I was working on. I had the habit of not sleeping until I was done.  Instead, I opted for 15-minute power naps throughout the day for a few days.

The cost of this extreme habit, of course, was weeks-worth of severe sleep paralysis accompanied by terrifying hallucinations.

Logen has written online since 2005 and gotten the knack of writing for an online audience since 2008. He now specialises in content marketing and copywriting within the SaaS and B2B tech space -- and is the Head of Content Marketing at Crazy Domains, Vodien, and Sitebeat.

Should the Finance Ministry Use Backlash to Strengthen its Influencer Campaign?

This website uses cookies to improve your experience. We'll assume you're ok with this, but you can opt-out if you wish. Accept Read More